Burton Chambers is a long time employee of Arasaka who currently is a vice president working out of the Detroit office. Little is known about him except that he must be of considerable value to the mega-corporation as he is the only known non-Japanese to be named a vice-president.

He directly oversaw William Moss which would tend to indicate that he was responsible for the PC’s near death experience. His animosity towards Zen, Saito, and Riptide seems related to an incident a couple of years back involving the terrorist Assan Al Fiaed. His reason for trying to eliminate Torrent and Helios is still unknown.

Burton Chambers in 2040 arranged for the collapse of IHAG which led to the corporate war between OTEC and CINO. THis led to the war between Arasaka and Militech which seemed to be his real goal. He did this so that the Soul Killer virus would be unleashed, giving him access to its code.

In July of 2041, Burton Chambers was reassined to the Night City office to deal with the Militech conflict there. 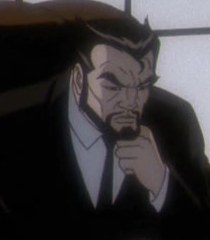