Colin Fisk led one of Arasaka’s strike teams based in Night City. He is a contact cultivated by Riptide during his time in Night City. Colin would never act directly against his employer but has been willing to leak information to Riptide related to Arasaka’s paramilitary activity.

During the team’s infiltration of the Johnston Atoll Facility, they were captured. They claimed that they were Arasaka agents operating under the authority of Colin. Not only did their captors not believe them, but Colin Fisk was subsequently arrested by Arasaka.

After spending several months of being held in an Arasaka prison, Colin was rescued by the team. He now works for Militech. 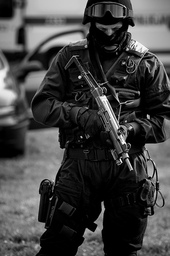