Jace was born in 2029 to a surrogate mother. His official mother is Alys Grant. He does not know who is father. Not that he knows his mother all that well. She was gone most of the time and left him in the care of corporate nannies. She did always encourage him to use computers, and he developed a strong aptitude for them, especially VR simulations. When he was 6, Alys had him apply at the Bartholomew School for Advanced Studies, to which he was accepted.

He certainly preferred school to his home life. One day, he was approached by a member of the cleaning staff at school. She said her name was Rya Mendez. She was his biological mother. They quickly grew close and developed at plan to escape to her home in Colombia. However, the plan failed and Jace was forced to return to Alys.

Later, Jace was taken from Alys and sent to an Academy run by Infotech. 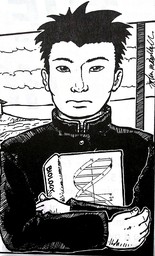