This duo are two people who clearly enjoy their work. Both being very attractive, they are not above exploiting their looks, but don’t tolerate male solos who think these two can’t do the job as well they can. Some speculate that the girl’s preference towards heavy weapons is their way of compensating for a lack of physical presence that the male solos have. Whatever the reason, they have a reputation for getting the job done, although they are rarely subtle in their work.

After several successful years in the trade, things came to a tragic end when they walked into a trap set by a vigilante known as The Dragon. Roxie was killed, and Krissy was badly maimed. It is unknown whether if and when Krissy recovers, if she will return to edgerunning without her mentor and partner. 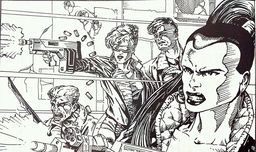