Alphie calls himself the Manic Hispanic because it nicely reflects both his heritage and his mental disorder. The fact that they rhyme is a source of great amusement for him. For a time, Alphie made his home at the Mediterranean. Most would find this odd since it is a drug den and Alphie does use drugs. He even refuses to take his medication. But since most people at the old hotel were in a drug induced world of their own, they left him alone. Alphie likes lots of company that he does not have to talk to. 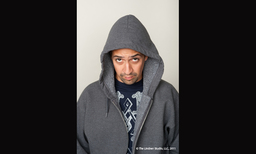