Lea is the sister of famous rocker Rory Murchison. Like her brother, she is haunted by the tragic loss of her family. Unlike her brother, who channels his rage through his music, Lea has taken a more martial appoach. She spent three years with the [Lazarus Group], training in special operations. She then went solo, operating under the handle “Ice”. While she is selective about which jobs she will take, she will jump at the opportunity to take any job that will potentially harm IEC.

Lea bears a strong resemblance to her brother, though she keeps her hair short and naturally colored. Unlike her moody brother, she is even tempered and cool under fire. She can come across as aloof and even cold, which explain the origin of her handle. 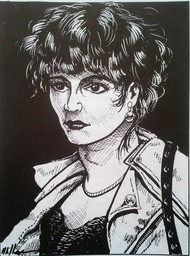